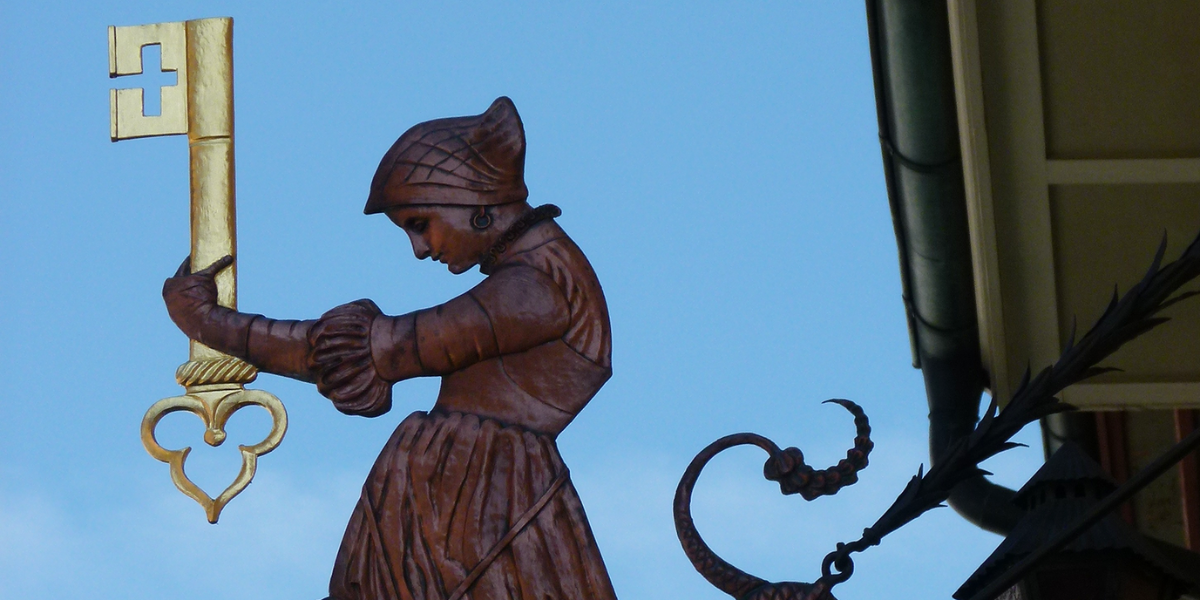 If you Googled the definition of “locksmith,” you might find the definition is relatively straightforward. The Oxford dictionary defines these talented individuals as “​A person whose job is making, fitting, and repairing locks.” But where and when did the term come from? You probably won’t find that from a definition alone. To that end, it’s a safe bet that you can figure out the origin of the word on your own.

Before getting into the etymology of locksmiths, we should peruse the history of lock making, how these masters of the key got their name, and how the term applies to home security service providers today. :

It’s time for a quick English lesson, and we’ll start by diving into the basics of the term. “Locksmith” is a compound word. These two or more words are put together to make a new word. In the case of “locksmith,” the two words found here are “lock” and “smith.” “Lock,” as defined by Oxford, is “a device that keeps a door, window, lid, etc. shut, usually needing a key to open it.” “Lock” originates in loc, an Old English verb derived from the Germanic word loch, meaning “hole.” Think of the Scottish noun “loch,” which means “lake,” as in a water hole. On the surface, locks are simply holes for keys to pass through and access.

With “lock” down pat, we can move on to “smith,” the second word. You might have inferred upon hearing “locksmith” for the first time that it “sounds kind of like a blacksmith,” as the two terms share a suffix. Oxford defines “smith” and “blacksmith” as “a person whose job is to make and repair things made of iron, especially horseshoes.” “Smith” is an English version of yet another Germanic term, in this case, the German “schmid” and the Dutch “smid.” There’s a great chance you know of people with the last names “Smith” or “Schmitt.” These are cognates or words originating from the same root. It just so happens that locksmithing was directly derived from blacksmithing.

Now let’s put these words back together. A smith who repairs things made of iron, primarily locks, is a locksmith. The word, in particular, originated in the 13th century when locksmithing became a profession distinct from blacksmiths.

How We Use “Locksmith”: The Precursors

Perhaps a better question is this: When did locksmiths truly become locksmiths? With all the technological advancements at their disposal, it can be easy to forget how old professional locksmithing is. Locks have been employed during many of the earliest documented civilizations, going back about 4,000 years to the primeval civilizations of Babylon and ancient Egypt. A notable difference between past and modern locks is their material. It is said that the earliest of these locks is an Assyrian example going as far back as 704 B.C. Locks back then were made from wood, not metal. These locks were large and cumbersome—they could reach lengths of two feet. Not exactly our idea of locks today, which are metal, compact, and lightweight but still durable. One element they did have in common were pins found inside the keyhole. These locks featured pins that could be accessed by a key that entered the bolt and was pushed upward to loosen the pins.

But does this fit our established definition of “locksmiths?” Not exactly. They were locksmiths of their era, though. Aside from stone, wood was the hardest, most manipulatable material of the time.

How We Use “Locksmith”: Baptism of Fire

As civilization progressed, so indeed did locks. This is where we abandon the concept of locks made from wood. Bronze and iron keys were being used as early as the Roman Empire for coin chests, and citizens sometimes wore them around their necks as jewelry. Suffice it to say these keys were much smaller than Assyrian keys. Settlements during the Middle Ages boosted the prominence of metal keys. Forges gave way to blacksmiths, known for constructing battle equipment like armor and weapons out of metal. This profession had extended to more specific industries like goldsmiths and, silversmiths, blacksmiths who worked with precious metals to create and sell jewelry.

More importantly, this was the beginning of locksmiths as we know them. Metal was used extensively on simple iron bolt locks throughout England and soon all of Europe. Spring locks, which are still in use today, have gone as far back as the Viking age in the late 800s. Centuries later, the term “locksmith” entered the English lexicon, inferring the concept of locks being professionally forged from iron.

For a long time after that, locks weren’t innovated much further because they already did their job well enough (It’s as the saying goes: if it isn’t broken, don’t fix it!). Some homes featured multiple locks to keep safety at a maximum. Instead of creating new designs for the devices themselves, locksmiths implemented more artistic possibilities in their products. These intricate designs made locks something of a status symbol, indicative of wealth. In China, locks made from steel and brass sometimes featured calligraphy and dragons common to Chinese designs of the day.

So, we got to the point where locksmithing truly meant “locksmithing.” But did this persist, and for how long?

How We Use “Locksmith”: The Industrial Revolution

Fast forward to the 18th century, during the onset of the Industrial Revolution. It was here that locksmithing underwent some of its most extensive redesigns in centuries. Up until then, locks were mainly metal innovations on older designs. Studies in advanced metallurgy were the game-changer, with more complex lock designs and some entirely new devices beyond keys.

Many inventors and innovators came along with the first significant improvements to locks, many of which are still in use. One commonly cited innovation is the lever tumbler lock, invented by Robert Barron. This precision lock uses a set of levers to keep the bolt in place, becoming a benchmark for lockpicking prevention. Barron’s lock is still in use but sought improvement by Joseph Bramah. Bramah’s version, the tubular cylinder lock, is still available for purchase after its inception in 1784. The pin-tumbler lock was an invention of Linus Yale, Sr. Not to be outdone, his son innovated on his father’s invention with a flat key. This key design, the basis for keys today, was pretty new. Up until this point, keys used the traditional skeleton key design. Yale was also responsible for the cylindrical pin tumbler and the combination lock, which made waves in the safekeeping industry. Furthermore, Yale’s “Infallible Bank Lock” invention allowed for changeable combinations and a steel plate behind the end of the lock. This design, for a time deemed “unpickable,” somewhat made the bank and safe owners locksmiths of their own.

Locksmithing diverged from blacksmithing when locks became heavily tooled, a direct side effect of the Industrial Revolution. Locks started using industrial pieces and tools like screws and hole punches as they reached mass production. The original locksmith profession was swept up in repair jobs, security companies, and key cutters. So, “locksmiths,” in the traditional sense, were replaced with lock inventors and innovators. But we still use the word “locksmith” in the present day. What could it mean this time?

How We Use “Locksmith” Today

Modern locksmiths carry a similar tune to the industrial stages of the last few centuries, but they don’t rely on the forge so much as their blacksmith-influenced forebears if only to make some of their parts in the factory. Today, locksmiths carry a wide variety of locks, parts, and services that maximize the safety of the whole property, not just doors and closets. Locks of this day and age are more complex and mechanical than the stiff locks of before; put simply, locks make use of metal parts from the forge with systematic alterations. With the advent of electricity and data collection, locks have advanced far beyond their origin in wood. Many electronic locks are imbued with computerized capabilities, making smartphones and keys become one through smart locks.

Modern locksmiths’ ability to manipulate and build locks is the contemporary equivalent of forgers today. It could be that “lock builder, programmer, and service provider” didn’t roll off the tongue as “locksmith” did. Factories now shape plastic key cards used in office buildings and hotels like forgers could keys and locks, but locksmiths still replace locks, change key codes in locks, and cut new keys for clients. Key cutting is most of what is left of the smithing element; it’s the primary activity now that involves manipulating metal. But the goal remains consistent: offering you the best and latest in home security solutions, and that’s why locksmiths are most likely here to stay.

Traditional locks still exist alongside electronic security advancements, and both will still require replacements and upgrades. Cylindrical locks still contain the pins found in Assyrian locks from 4,000 years ago and can be found in most households today.

Conclusion: The Meaning of Locksmith From Past to Present

At the end of the day, with help from some historical context, we can evaluate how the term “locksmith” has deviated from its origins and how it remains consistent. A job borne from the forge and anvil era, locksmiths were the evolution of lock makers from the earliest human civilizations. By the time metal was smithed during the Middle Ages, there were arose blacksmiths devoted to creating locks during the 1300s, and thus the term “locksmith” came to focus. The Industrial Revolution changed how locks operated, and the computerized locks of the present changed the concept of keys. They might have come a long way and expanded far beyond the home’s front door, but locksmiths still specialize in the access point between private belongings and potential threats. And thankfully, we will always be able to count on their services as they remain on the cutting edge of security advancements, perhaps for another four thousand years.

How Do Locksmiths Cut Keys?

What Do Commercial Locksmiths Do?